Marketing: The Theater of the Absurd?

Lay Down the Absurd: The Practice of Learning to Listen

I frequent Pizza Sola with my boys, a local Pittsburgh shop. It’s kind of our Boy’s Night Out place. Because I’m obsessed with social media I check in on Foursquare, and sometimes push it out to Twitter. They are good at responding, and often thank me for coming in. They have done the work of learning to listen to their customers.

Actually, they’re really good listeners. Several years ago as I was looking for work, I tweeted that I had just submitted an application to Google using the hashtag #fingerscrossed. The social media handler saw my tweet, responding “Good luck!! #fingerscrossed”. I hadn’t even been there recently. They responded to me about something that had nothing to do with pizza. In fact, not even any of my personal connections responded.(!) They sured up my patronage with them that day, as well as made a brand advocate. Why? Because there is a person behind every Twitter account, and people need relationships.  One person listening to another is powerful. It’s one of the most significant gifts we can offer another.

The biggest mistake you can make in trying to talk convincingly is to put your highest priority on expressing your ideas and feelings. What most people really want is to be listened to, respected and understood. The moment people see that they are being understood, they become more motivated to understand your point of view. ~David Burns, Voluntary Professor at the University of Stanford School of Medicine

The term broadcast comes from our agricultural roots, to scatter over a broad area. Social implies the interaction between people. If we use both mediums in a metaphor at a party, broadcast media would be the band on stage. Or the guy at the party who talks real loudly about himself, trying to raise his voice over those around him. To accurately fill out the metaphor, this annoying guy would be on stage with the band, shouting about his deeds, greatness, etc., to everyone. Or, to no one in particular.

And that’s what broadcasting is, yes? Spray and pray, I’ve heard it called. You just shout out what you’ve got to say over the radio, TV or newspaper, hoping someone -anyone- will hear it and buy your stuff. The big companies are the band, and let’s admit it, sometimes the annoying guy. (Maybe too often, eh?) The folks at the party could bag out and leave the band and annoying guy anytime; they have the power to vote with their feet. And they’ll talk to their friends, families and colleagues about it later. Social media at this party are the friends or other party goers interacting with each other. You don’t shout at your friends or that attractive woman over by the bar, you talk to her. You don’t do broadcast media on social mediums. People will leave the party.

What’s In Your Marketing Script? 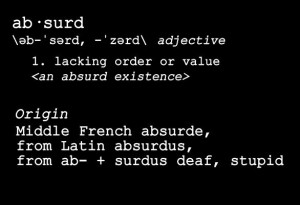 The market is increasingly looking like this metaphor, and just like at the party, there are great deal more folks (partiers) in the market than sellers (bands, or annoying guys. Hopefully.). In my first career as a spiritual director for college students, my mentors directed us to listen. They offered that the word absurd actually is rooted in the Latin word “deaf”, or in music “dissonance” (as in the inability to discern/hear the music). Marketing has always been a challenge, figuring out your voice. But the broadcast medium, is absurd, yes? It can’t listen or hear those it speaks to. It is deaf, and to carry the metaphor further, subsequently dumb. Talking only about yourself, without offering any value besides 20% off, is the deaf crying out to anyone, or in reality to no one.

Social media allows a business or organization to build relationships with clients and not-yet clients and be in relationship. When you listen on social media, you can hear what they’re talking about, discover their interests and needs, get to know them. But -more importantly- you can engage with them with their interests or needs. You can wish them happy birthday, say “Good luck!!” #fingerscrossed”, or offer condolences during a difficult moment.

But by listening, you can also meet people where they are with the value of your service. In this collection of case studies, one company scored well:

MORTON’S: You may have heard about social media consultant, Peter Shankman, who had the  good luck when tweeting a shout out about how a Morton’s steak would be just the right ending to his flight arriving in Newark. The consultant with 150,000+ Twitter followers was greeted at the airport by a man in a tuxedo sent by Morton’s to deliver a complete steak dinner. Social media listening enabled Morton’s to pick out advocate from the crowd and create influence at a low cost. It probably didn’t hurt Shankman’s influencer rating and visibility either.

Learning the balance is part of the strategy, something that takes practice and direction. What sorts of things to post, when, and to whom, are all a learning process. To be clear: you may find in your strategy that there is an appropriate need for broadcast media use. We must cannot confuse them, employing one method in the other. It lacks order and value when you take it out of context.

Next week we’ll cover some ways to listen to the marketplace. In the meantime, have you employed both broadcast and social mediums? What tricks have you learned to “work the party?”