WHAT THE HELLO IS ELLO, PART II 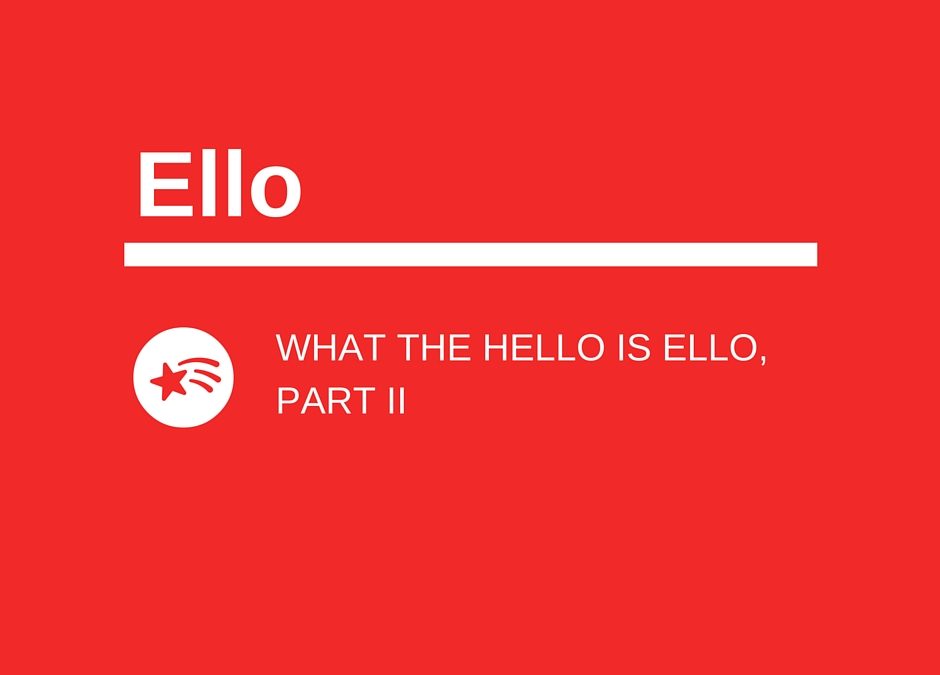 I’m in (@jlberg)!  One of those cool friends I mentioned in Part I (@sobryan) invited me to join Ello.  But, I’m apparently not alone.  I found various sources that claim Ello is getting anywhere from 30,000-50,000 new people per hour.  That most likely includes invites, requests to be invited and new joiners so the number of actual hourly membership may not be as high but it is still an impressive amount.  So, will it continue speeding along or come to a screeching halt?

Here is my impression of the site and I am an expert…at being a layperson, so my thoughts count.

It’s definitely simple and clean, maybe too so.  I would need to spend more time there to really get a sense of if the aesthetic is “liveable” over the long term.  But, it’s definitely a departure from Facebook.  However scary data-mining and privacy issues are and as annoying as too many ads can be, personally, I am one of the few people that kinda likes the fact that things I might be interested in pop up without me looking for them.  I’ll bet many others will, at least to some extent, agree.  However, I wouldn’t necessarily need that in a place where all my friends hang out and I can see tons of cool stuff.

A social network is inherently someplace to see and be seen.  When I was in college I used to study in the coffee shops or other public high traffic places so that I could people watch, meet knew people and bump into people I know.  Popular social networks give me that same feeling, only digitally.  If Ello can reach a critical mass of users including my personal friends, I think I could hang out there.  It won’t likely ever equal Facebook numbers but, the founder, Paul Budnitz has stated he is not interested in that.  However, you don’t need a crowd of a billion to make someplace a great place to see and be seen.  If Ello is truly adding 50,000 an hour, it’s got plenty.  Keep in mind that users flock en masse when something is hip and flee just as quickly when it needs a hip replacement. 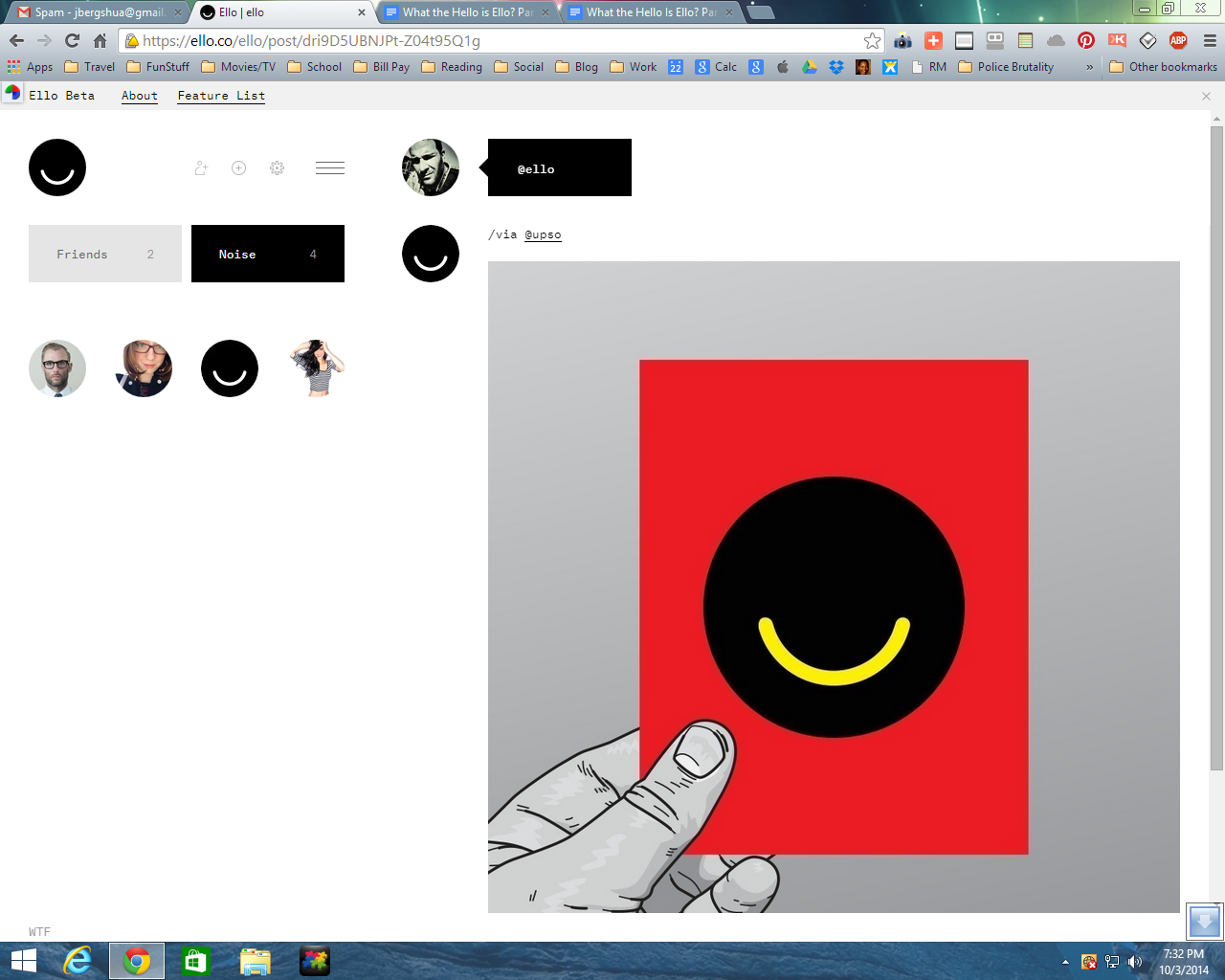 Since so many current Ellovites have been invited by friends, I believe for now Ello has stopped welcoming in those who made a request strictly on the site itself.  They claim it will overload but I think it may have something to do with riding the wave of exclusivity hype.  To their credit, I did receive a nice email explaining this all to me and asking me to be patient.  Of course, I am in the club already so I don’t have to wait but it’s nice of them to keep everyone informed.

So, how does the site work?  I’ll get this out of the way…yes, there are problems and it is buggy but they clearly state it’s in beta and, as I mentioned in Part I, they update their list of features regularly to see what they have corrected, added and are building.

Some of the coolest things right now include in-line emoji creation (I think it’s just me that really gets a kick out of that one :-), amazing image display and, coolest of all, the Noise  feature.  Other networks have algorithms they employ to cut through the clutter by deciding what you want to see and don’t.  Ello cannot do that because the data it collects is totally anonymous and is used only to improve features on the site.  Plus, you can opt out entirely.

In order to solve the problem of clutter, it created Noise.  If you have a friend in the Friend column, you will see all their posts in one stream.  If you place someone in Noise, it creates what it calls a “fluid grid” that displays all posts in a way you can see many quickly.  Plus, nobody knows when you move them from Friends to Noise or back (although I’ve already let some of my immediate family know where they are going 😉 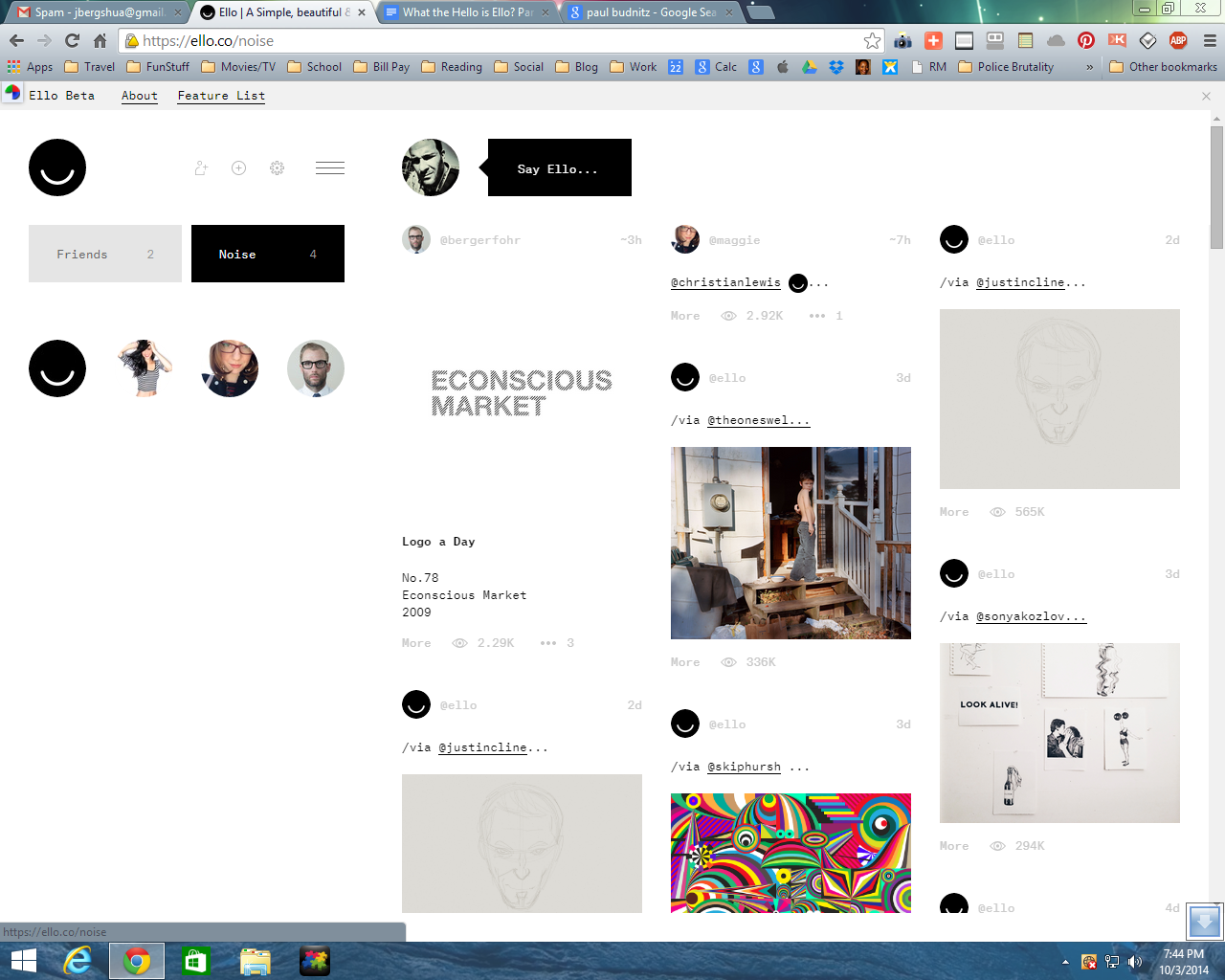 Most other features so far are aesthetically unique and pleasing but, functionally pretty standard.  Since the site plans to monetize by charging for the most desirable features, I’m curious to see what they come up with.  Mr. Budnitz has mentioned things “such as a designer emoji pack (I’d pay for that) or a multiple-account login.”  He also says that people are writing in with feature ideas so they will be creating was is not only most desirable but also most desired.

Ello Bumps In the Road

So far, I’ve signed into Ello but a few times and I had a bit of trouble posting a photo and navigating so I haven’t spent too much time there yet.  I plan to make an effort this weekend and start increasing my current friend base of three.  I like the fact that although there is a Friend column, you don’t request someone to be your friend, you just follow them and then they are automatically your friend and you are theirs.  I knew someone once who thought that is the way things work in real life.  They are in an institution now.  But, on an online social network, it is actually very appealing.  Also, as far as I can tell, anyone who is a member can be friended by anyone else but there might be a setting to change that.  As far as posts go, the usual data is tracked – views, comments, time live, etc.  However, there is no “like” button which I find I don’t need anyone because it makes commitment wishy washy.  If something really appeals to you, comment damnit!  I think they need to add a share feature too but that could be in the pipe.

I have followed a bunch of random people and there is some awesome stuff.  I can stay on a site for a while if there is a lot of posts that attract me even where there is nobody I know (Pinterest is case in point) but, it remains to be seen how long Ello can hold my attention.  Although, they may keep me pretty long since there doesn’t seem to be a place to logout (Maybe that’s intentional).

Honestly, of the three friends I have, I only really know one personally and, since a huge part of why I go on social networks is to see what people I know are willing to say and post online that they may not in person (including myself), my time will probably be limited until more people I know join.

It also remains to be seen how long Ello can hold the public’s attention.  Judging by Paul Budnitz’ other long term business (he started Kid Robot and Bunditz bycicles), Ello will remain as he envisioned it, a small alternative to Facebook, that is functional, safe and pretty.  If, however, it invents oodles of “must-have” features and becomes the place to be for a billion users, he may have to rethink his vision.

One thing is for sure, you will never be able to describe it using the “F” word.